Sorry this blog has taken so long. This is the second post of four analyzing the major Canadian federal political parties' positions on Israel-Palestine. 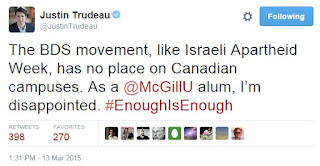 The Liberals often articulate a position that relies on the Conservative position by saying they stand for a “more balanced” approach to the question of Israel-Palestine. While it is good that they see the above Conservative position in a negative light, the Liberal position is far from clear to me. Trudeau has recently said through his Twitter account that “The BDS movement, like Israeli Apartheid Week, has no place on Canadian campuses.” It is unclear if he is advocating for the government to do something to enforce his views, but it’s troubling enough that he is speaking out against such things. And while he doesn’t generally go out of his way to say anything about Israel-Palestine, this was clearly a calculated statement.

The Liberals under Chretien consistently voted in favour of the peaceful settlement of the question of Palestine every year at the United Nations General Assembly. However, when Paul Martin became Prime Minister, Canada began to abstain. I actually was not aware of Trudeau ever taking a position on how Canada should vote on the annual UN resolution on the two-state solution. However, my Googling while doing research for this post produced a very helpful article quoting Trudeau at length from an event he spoke at in February 2015 in Winnipeg.


In the article, Trudeau praises Paul Martin’s shift to abstaining on the peaceful settlement of the question of Palestine and says he would take the same position. He also clearly opposes the UN bid for statehood that was brought to the UN General Assembly in November 2012, calling it a “unilateral action.” That phrase comes from the Israeli government, but it is one that boggles my mind, given that 138 countries in the world supported the move and only 9 opposed it. While I understand what he is saying is that statehood needs to be negotiated with Israel, Palestine’s declaration of statehood was far from unilateral.

More recently, the National Post published an article on a local battle in the riding of Mount Royal in Montreal where the Conservatives and Liberals are in a heated race. The riding, according to the Post, has a population that is 37 percent Jewish, and assuming these two candidates know their constituency, that population is overwhelmingly anti-Palestinian because they are climbing over each other for who should get the anti-Palestinian vote (NOTE: I think it is extremely important that a large Jewish population is not labelled anti-Palestinian by default. There are many Jewish people in Canada and around the world who stand for justice and peace for Palestine). The Liberal candidate, Anthony Housefather, is quoted as saying, "...we will not change the votes at the UN on Israel...we will continue to boycott anti-Semitic conferences like Durban...we're completely opposed to BDS (Boycott, Divestment, and Sanctions movement targeting Israel.) I try to reassure [Jewish neighbourhoods] what Justin's actual positions are. He's as supportive of Israel as the Conservatives are."

It is difficult to track the Liberals' positions on Israel-Palestine because they speak of it so little (more on that in the next section), but this interview would seem to indicate that the Liberal position has shifted, specifically on the way they would vote in the UN, from abstaining on the annual UN resolution on the two-state solution to opposing it. That shift would put a Trudeau government even further into the anti-Palestinian camp than Paul Martin's Liberals and would make it, at least on that specific part of the issue, a polar opposite to the position of Chretien's Liberals. It is a shameful shift, indeed.

To top it off, there is also this video (start it at 1:53) Trudeau sent to an event in support of the Meir Hospital in Israel. In the video he states that Canada and Israel share values, including "democracy, openness, tolerance, compassion, respect for the rule of law, and, perhaps above all, the quest for peace." I'm not going to dissect in this space how those values, I hope, are not ones we share with Israel, particularly when it comes to how it treats the Palestinians within its own borders and the Palestinians they rule over in the Occupied Palestinian Territories. I'll assume if you're reading this that you understand how troublesome that comment is (and if not, let's chat sometime!).

Willingness to discuss the issue

While the above material shows Trudeau has discussed the issue of Palestine from time to time, it is by no means a regular occurrence, and I could find no instances where he discussed it from a human rights perspective. I couldn’t find a single mention by Trudeau of Israel’s settlements in the West Bank, of the wall Israel has built on Palestinian land, or really anything about the problems with Israel’s occupation of the Palestinian territories. The article on the Mount Royal race cited above is quite a rare one indeed, where a local candidate speaks out in very specific terms to a national newspaper about his party's positions on Israel-Palestine.

Diversity within the caucus

The Liberals have been known throughout their history for being a “big tent” party, where there are some MPs and candidates who are more conservative and some who are more progressive. That continues to be the case, in my view, but it is much harder to see at present. Part of that is because in the current media age anything a candidate says in one part of the country can be immediately broadcast to the public everywhere in the country. That means political parties are much more careful than they used to be at ensuring candidates don’t say anything that will cause questions to be raised about the party’s position on any given issue. That carefulness is even greater at election time, so it will be more and more difficult to see diversity of opinions in all of the parties.

The other reason the big tent is difficult to see at present is that the Liberal caucus elected in 2011 was the smallest in the history of Canada. One former MP I’m aware of with a better position on Palestine than his leader is Boris Wrzesnewskyj, who is running again in the Ontario riding of Etobicoke Centre. While an MP he was a member of the Canada-Palestine Friendship Group and travelled to both the West Bank and Gaza the summer of 2009 on a human rights trip. Space and time do not allow me to go into depth with specific citations, but my impression is that the Liberal caucus and slate of candidates is still quite diverse when it comes to the question of Palestine, despite the unproductive positions of Justin Trudeau. That said, if my assumption is correct, Trudeau's anti-Palestinian positions need to be brought out into the limelight. I think many Liberals, supporters and candidates alike, would be deeply disturbed by the subtle shift he has made to that party's policies.

I was actually much more hopeful about the Liberal position on Israel-Palestine before I began digging around for material for this blog post. The issue is raised so rarely that it is difficult even for the most engaged observers to know where the Liberal Party stands. It has not always been this bad, but the Liberal Party while it is under Justin Trudeau's leadership is very difficult to distinguish (or, according to its candidate in Mount Royal, not distinguishable at all) from the Conservatives.
Posted by Joel French at 10:25 PM

Joel French
I'm a social democrat living in Alberta. I am the Executive Director of Public Interest Alberta, but this blog is my own and is not affiliated with the organization I work for. Prior to working for Public Interest Alberta, I worked for Friends of Medicare, where I did communications and progressive political advocacy on health care policy. I also worked in the office of Brian Mason, then-Leader of Alberta's NDP, from 2010 until 2012.

I grew up attending and being very involved in a Pentecostal church. My conception of Christianity since then has drastically changed, but my background there has profoundly shaped my outlook on the world.

A passion of mine is the Israel-Palestine conflict, among other international issues. I have a degree in Middle Eastern and African Studies and Religious Studies from the University of Alberta. I have also toured as an independent musician, and have a diploma in computer programming. I'm a big sports fan, particularly of the NHL and NFL.